This is my story. It will inevitably be different than yours. It is not so much a guide as a giant thank-you note.

Altogether, I am incredibly fortunate. My un(der)employment only lasted six months. I was able to work part time, so I was never completely unemployed. Financially, it wasn’t easy, but I made it through without any permanent damage. The worst was the perfect storm of heating bills (I advocate summer underemployment), Christmas credit card bills (again, no pesky Fourth of July presents), and the property tax bill for my vehicle (hmm, that does happen in July, too). I could have lived quite happily without January.

There is so much that I thought about doing during the lull in my employment. I considered trips to the beach, museum visits, taking the train to New York for the day. If given a choice, I would have chosen to be out of work during the warmer months of the year, those more conducive to cycling. It doesn’t really matter which half of the year a person is out of work, though. While underemployment provides plenty of free time, it is rather stingy with the spending money. I constantly faced the emotional tug-of-war of wanting to leave the house, but not feeling that I could afford to. Fortunately, I live in a great place, with highly talented people, and plenty of affordable entertainment. Over the past six months I attended Envisionfest, Nightfall, Other People’s Stories, The Ear Cave, and two events at The Hartt School, most recently the Women Composers Festival. I even attended the Colgate Women’s Basketball game at UConn, which added to my alma mater’s [thirteen] minutes of fame. All of these were free! Ok, the Colgate game was free with four years paid tuition, but I digress… I volunteered for The Connecticut Forum and was able to attend their events, too (the Vision & Brilliance panel was phenomenal). Without a steady paycheck, I managed to be happier and do more things than in the past when I had much more money.

While events are fabulous, the emotional support of my family and friends has been priceless. My parents did everything from sending me home with leftovers to making sure I could attend my nephew’s first birthday party. My sister put her son in front of the webcam whenever I needed a smile. A giant hat tip to everyone with whom I regularly interact on social media, as well.

A growing part of my life, particularly since the fall, is my relationship with the Mandell JCC. I am in awe of how much more than a gym 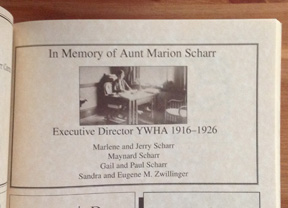 membership it has become for me. Toward the end of the summer I was invited to participate in the Stavis Leadership Forum (a joint program with the JCC and the Jewish Federation) and asked if I would like to be on the Hartford Jewish Film Festival committee. I can’t do justice to either in this paragraph, but both have been great experiences. For the film festival I suggested a Kickstarter campaign, and the committee was willing to try it. The extra time I had allowed me to put together our project (please watch the video and support us!). Most recently I was recommended to help with a project for the JCC’s centennial. In the process, I found out my Great Aunt was an Executive Director of one of the agencies that became the JCC. I guess I’m meant to be involved!

Sure, these six months were not entirely puppies and rainbows. There were job interviews and rejections. Weeks went by without there being any positions posted that grabbed my attention. Evenings out with friends were far more likely to include a glass of ice water than wine. As a contractor, if I didn’t work, I didn’t get paid, which took away from the glamour of hurricane and blizzard days. I’m also still recovering from the fear that I wouldn’t get this job, and would eventually find myself in a nightmare situation, such as unemployed. In Greenland. But I survived by having a strong, supportive, and varied network that allowed me to enjoy life as much as I could. This had the possibility of being a very dark period, but my community kept it light. Certainly there were days when my spirits were down, but those days were the exception. I don’t wish un(der)employment on anyone, but if you do find yourself there, I hope you have plenty of community support to see you through.

One woman, one bicycle, and a search for dead relatives.

I am not a genealogist. I used to work with a woman who was fairly intent on finding a connection between herself and everyone else in the building. That is a bit intense. I believe it is good to have some knowledge of family history, but grandparents, great-grandparents, and a layer of cousins or two is good enough for me. However, combine anything with bicycling and exploring Hartford’s history, and I’m game.

Regular readers of this blog (*chuckle*) will recall a post from earlier this summer in which I discussed my great-grandfather, Jacob M. Richman. Recently, a cousin found that post. On Friday evening I had a phone conversation with him, during which he told me about the work he is doing on our family tree. He asked me what I knew about when Jacob came to Hartford, and if we have any idea when he actually came to the country. None of this information is easy to find. When the cousin sent me the link to the information he has gathered, I admit, I was hooked.

The timing was really perfect. I need things to focus on in between sending out job applications. If I had called the cousin when he originally contacted me, I would have had all the resources of the CHS at my disposal. Alas, having waited a couple weeks, I had to sign up for the free two week trial of Ancestry.com. After reviewing much of the information on the tree, I decided it was time I did some exploring.

I have visited my maternal grandparents grave many times; it is quite nearby. Never, though, had I seen the graves of my their parents. Locations in hand, helmet on my head, and camera in my pocket, I set out for the cemeteries.

Hartford’s first cemetery, now known as the Ancient Burial Ground, has always been in the heart of the city. As the years went by, the residents of the city came to the conclusion that living so close to death and disease might not be the best policy, not to mention the cemetery was filling up. For their next burial ground, the residents went north, starting Old North Cemetery. Later, Hartford’s first Victorian era cemetery, Spring Grove, would be put into place a few blocks away.

The Jewish cemetery where Jacob and Hannah Richman are buried is adjacent to Spring Grove. It is one cemetery, occupied by three Jewish organizations, one of which is now known as the United Synagogues of Greater Hartford.

From what I had found on Ancestry, I knew Jacob’s grave was “X53.” Unlike some cemeteries that label their sections, the only markings visible were on the stones themselves. I had no idea where to start. Looking back, I’m fairly certain I started at Row A. It took a while to get to Row X, but eventually I did. Walking up and down each row, I found a few other cousins as well. There was plenty of room between rows for me to walk with my bike. In most cases, there is so little space between headstones, everyone underground must be pretty cozy.

Next I rode south to Zion Hill Cemetery. I have passed Zion Hill countless times. I couldn’t get to my graduate courses at Trinity College without going by. Yet, I had never been in there. Part of the reason for this is the surrounding fences and gates do not make it appear very welcoming. I entered through the first open gate I found, only to realize later that there were many open gates, and a main entrance.

Zion Hill was too large to employ the start-at-row-A method. Luckily as I rode around, I was able to find the portion of the cemetery occupied by the Hartford Workmen’s Sick Benevolent Association. Even more

fortunate was that Morris and Paulina Scharr were in the first row I walked down. Since they were “G32” and “G31,” respectively, I then knew which direction to head to find their daughter and her husband, Bessie Scharr and Jacob Zwillinger.

Even though this morning I had found an obituary for another daughter of Morris and Paulina, Ida Scharr Zwillinger, I had somehow missed the fact that she is buried next to her parents. I was glad her headstone caught my eye as I was heading back out of the cemetery (it seems that Bessie Scharr’s first husband died, and following Ida’s death, Bessie married Jacob Zwillinger; it cuts down on the relatives at Thanksgiving).

Within two hours I had biked through the city, located the markers for several relatives, and visited two Hartford cemeteries I’d never explored before. It was a great way to spend a crisp, late summer/early fall day. Overall, finding the cemetery plots was fairly easy. Some of the roads were a little sketchy, but being on the bike reinforced to me how close these memorials have been to me. I love living in a place that I know so well, yet there is always someplace new to explore.

I was left with one unanswered question. Why did we give the dead people such a great view on the city?

The advantage to unemployment is finally having the time to visit museums and other cultural institutions that are generally only open when you are working. That is what I did today, parking my bicycle at the Wadsworth and walking the rest.

(Clicking on the first photo will then allow you to scroll through the rest of them.)

I made it through the first week of #funemployment2012. There was house cleaning, time in coffee shops, work on a continuing project, bicycling, and today I just relaxed and enjoyed the city.