For many people, 2016 was, to quote from social media, “a dumpster fire.” Between what feels like an incredibly large number of celebrity deaths, and the events of November 8, it certainly had its moments. For me, though, it has been one of the best years in quite a while.

The atmosphere at work changed from the very first day of the year. We started a new chapter (excuse the pun), which led to my getting a promotion. The job I have now is not anything I ever imagined I would do. However, I enjoy it. I’m good at it. And most importantly, my work is respected.

I dated. For many of you, this is no big deal. It was huge for me. Maybe I’m too particular (this did not involve any commercial web sites), maybe it’s social anxiety, maybe it’s this, maybe it’s that. Whatever. For a few hours this summer, I was able to put that all aside and hang out with a guy.

My best friend from high school and I started our birthday celebrations a couple months early this year. We spent a weekend in New York, having splurged on tickets to Hamilton. The show was (as you’ve probably heard once or twice) amazing. Getting to spend hours walking around the city, on beautiful, sunny days, talking about everything and anything, was equally wonderful.

Later in the summer I was asked to be the Vice Chair of the Hartford Jewish Film Fest (March 16-26, 2017…see you there!). I’ve been on the committee for a few years now, but this is my first leadership role with the Hartford Jewish community. The film fest falls into the category of ‘lots of fun and lots of hard work,’ and I’m looking forward to being more involved than I have been.

The next step in my birthday celebration was a week in Wisconsin with my family. We
stayed at a lake where my grandparents used to have a house. I was able to visit with friends I hadn’t seen in a few years, introduce my niece and nephew to some very dangerous (but incredibly beloved) playground equipment, and spend copious amounts of time outdoors. Swimming in the lake is one of my favorite activities, and I don’t get to do it nearly as often as I used to. Even the morning it was 48°, I was in for a dip before breakfast! 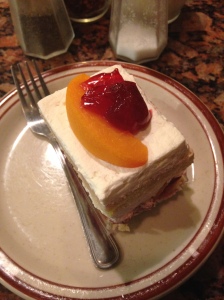 When my actual birthday arrived, I celebrated with a bike ride from West Hartford to Old Saybrook. It was another warm, sunny day, and perfect for the 54 mile trip. By mid-September, the water in Long Island Sound has reached a perfect temperature. It was incredibly refreshing after spending four hours on the bike. My mother met me at the beach, we had lunch, did some shopping, and then she drove me home. Later that day a friend and I went to Mozzicato’s, where I had just the right amount of cake.

Though I have branded myself as Cycling Archivist, over the past few years I have done increasingly more of the former and less of the latter. This fall I had the opportunity to process a collection for the Watkinson Library at Trinity College. It’s a small collection (less than three linear feet), but I welcomed the opportunity to get back in the game. Working full time at one job, and trying to fit in another four or five hours a week at a second job, is tough. There are some interesting pieces, though, and I’m glad I got to work with them (I wrote five blog entries between October 28 and December 14 about the collection. Search for ‘Wells’).

Cycling. It has continued to be a huge part of my life. On the last day of July I realized I was a mere 35 miles away from hitting 500 for the month on my road bike (I don’t keep track of distance on my hybrid). I couldn’t let that milestone slip by. My pace for the ride ended up being my fastest ever. Most Saturdays I have a friend to ride with, which is wonderful. One Sunday I went out with some racers. It was fast, and I couldn’t really keep up, but I gave myself points for going on a group ride (I’m a slow rider and generally avoid group rides because of the frustration they bring). My biggest cycling accomplishment of the year, though, is my new personal best record for biking to work. As of this writing, I haven’t missed a day commuting since February 23. That includes the day in April when it snowed, which I admit was a

mistake. Excluding weekends, holidays, and vacations, I have ridden to work 191 days in a row. For the year, I have 218 commutes. Yes, there have been days I’ve switched vehicles at lunch. But I still got in the bike ride. Who knows what Mother Nature has in store, but I am trying to get as close to February 23, 2017 as I can!

One of the best holiday gifts I got was the weather in Atlanta during my recent trip there. I was able to ride my sister’s bike each day, including Christmas Day, when it was 75°!

Don’t worry, the year wasn’t perfect. Amid all these high points, were certainly were some low ones. But the first time in a while, the highs were more numerous. A lot of this was luck, and things I won’t necessarily be able to replicate next year. Friends have had marriages end in 2016, and have lost family members and close friends. Certainly for them, this was not the best year. I hope everyone else, though, can look beyond the top headlines, and see that there were many good things that happened in 2016.