I prefer to spend at least a portion of my lunch hour outside of the library. There are two general rules I follow: 1) Unplug 2) Vary the route. This week I chose to break both of those.

I walked the same path along the river three days in a row. On Wednesday I had unplugged, but you can get an idea of what it was like by watching my friend Brendan’s short video. I believe he recorded that on Tuesday, so there were more sheets of ice floating by, and more frequently, when I was there. The ice sheets were jockeying for position as they made the trek. Some were trying to sink others, some were content to glide along without making a fuss. If you haven’t watched (and listened!) to something like that, I recommend it. It’s fairly mesmerizing.

Overnight it got pretty cold. All of the really cold days are blending together, but I think Thursday was the day we woke up to temperatures in the single digits. The river had slowed down, too. 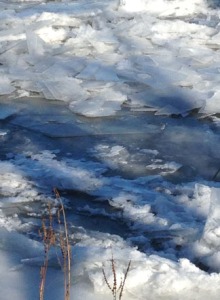 It warmed up on Friday, but not before we got a few inches of powdery snow. 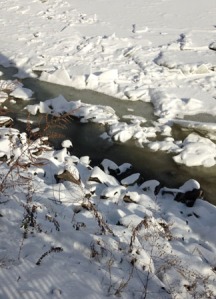 It surprises me how much of a difference a day can make to a river.

It’s January and the snowflakes are finally on top of their game, per Lucy.

I believe this is the third time it has snowed this season, but as it will be in the upper 50s tomorrow, I have no intention of shoveling. That seems to be the pattern this season. As it saves me from neck and shoulder pain, I’m fine with it continuing.

I love the look of my twinkle lights surrounded by snow, and set out to see what I could capture with my point-and-shoot. I didn’t really get exactly what I wanted, but I always enjoy playing with the various settings.

I wish I’d gone out in the daylight to take a picture of the holly.

But this one is fun: